There has been a jump in roaming use during 3rd quarter 2017, both in terms of voice traffic and in terms of Internet/data traffic.

Portuguese customers generated an increase in roaming out calls (36.9%) and voice minutes (50.8%) versus 3rd quarter 2016, while Internet usage increased by 60.7% in terms of the number of access sessions and by 320.9% in terms of volume of generated traffic. In the case of foreign users using national networks (roaming in), the year-on-year growth in calls (41.3%), voice minutes (57.7%) and Internet access sessions (99%) was even higher, while Internet traffic increased by 299%.

These trends are linked to the new rules on roaming prices resulting from the European regulatory framework which has established a "Roam Like At Home" policy. Under this policy, the price of roaming communications between countries in the European Economic Area may not exceed the tariffs payable for national communications.

In the quarter being reported, the mobile service had a penetration rate of 170.5 per 100 inhabitants, with a rate of actual use reported at 127.4 per 100 inhabitants. According to data from Marktest's Barómetro de Telecomunicações (Telecommunications Barometer), in 3rd quarter 2017, 95.5% of residents in Portugal were customers of the Mobile Telephone Service.

According to Marktest's Barómetro de Telecomunicações (Telecommunications Barometer), in September 2017, approximately 39.7% of residential customers of the mobile telephone service subscribed to this service as part of a bundled offer which includes services provided at a fixed location.

Meanwhile, there were around 7 million actual users of services which are typical of mobile broadband (video telephony, data transmission, broadband, mobile TV, etc.), increasing by 12.6% from 3rd quarter 2016. The growing use of these services is associated with the increase in the number of mobile phone Internet users (+14.6%), and the growing penetration of smartphones.

MEO remains the main provider, with 43.8% of active mobile stations with actual use, followed by Vodafone with 30% and NOS with 24.2%.

In terms of traffic, the volume of conversation minutes originating on mobile networks increased by 4.1% over 3rd quarter 2016.

Meanwhile, use of the text message service fell by 11%, due to the appearance of alternative forms of communication.

At the end of 3rd quarter, accumulated revenues earned from services to end-customers were reported at 993 million euros, falling 3.4% from the previous year. 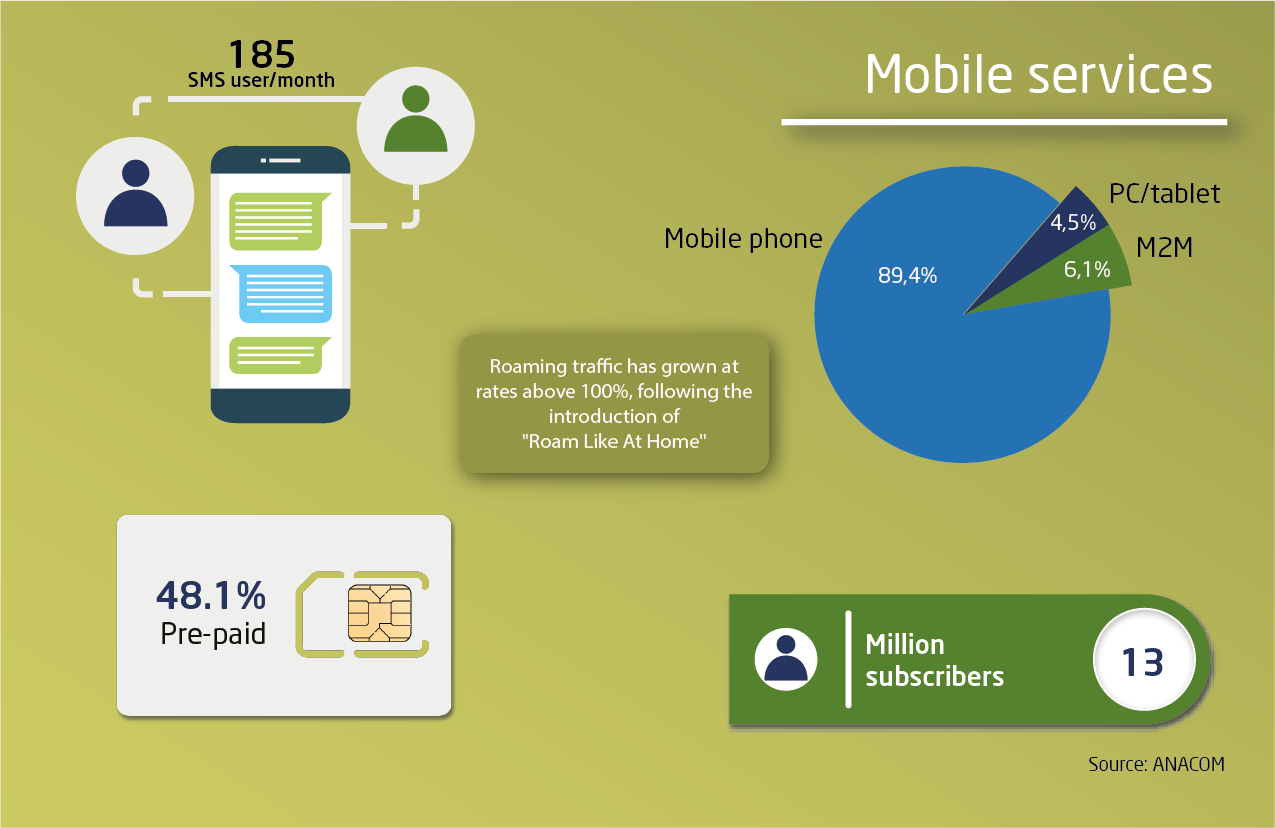