Institutional
An english version of this page will be made available soon.
You may wish to go to the english homepage.

ICP-ANACOM regularly conducts investigations in the market - either because complaints received by this Authority reveal evidence of non-compliance which warrants confirmation, or upon its own initiative. In 2010, investigations were conducted in various areas: electronic communications, postal sector, message-based valued added services, spectrum management, equipment and other areas. In total over one thousand inspections were carried out over the year. 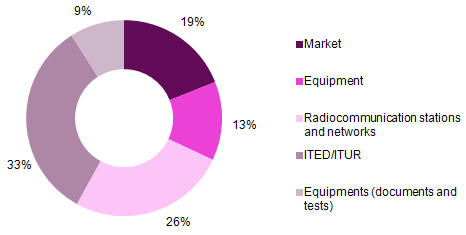 Actions focusing on the electronic communications sector were launched in order to verify compliance by authorized entities with the obligations set forth pursuant to the titles authorising exercise of activity and pursuant to applicable legislation; such actions were taken with a view to preventing situations which might potentially distort the normal functioning of markets, and also with a view to finding solutions for the possible settlement of disputes between operators and/or between operators and/or consumers.

Alongside these actions, ICP-ANACOM continued to control the exercise of activity and provision of services by entities that do possess any authorising title duly issued by ICP-ANACOM for this purpose.

The set of measures implemented, include:

Aiming to ensure compliance with the activity licences of service providers and, at an operational level, respond to requests for intervention that may arise as a result of consumer complaints, 18 investigations were carried out in the postal services market. These investigations sought to check the activities of postal service providers according to the permitted scope of their activities under the terms set out in the various authorisation titles, whereby it was concluded that that there were no situations of non-compliance and no citations were served.

With regard to telecommunications infrastructure in building and in housing developments, urban settlements and concentrations of buildings, 568 inspections were carried out in 2010, including 457 infrastructure inspections, which led to detection of 114 cases of non-compliance (in relation to the respective project and applicable technical standards, or in the project in respect of applicable technical standards). These actions resulted in 73 cases being referred to litigation. 111 investigations were also undertaken with respect to ITED/ITUR training entities.

In addition, ICP-ANACOM answered queries and responded to 366 requests for information, involving a range of technical and legal analyses.

These actions were conducted to verify that the actions of market agents were compliant with the new legal framework which entered into force on 1 January 2010. The new regime includes new technical rules, ITED Manual - 2nd edition and ITUR Manual - 1st edition, giving rise to considerable technological change and a broadening of scope compared to the old regime. This has had a significant impact on the sector and brought clear benefits to consumers, particularly by facilitating optical fibre access to next generation network services.

Under new legal regime, all technical ITED training must be conducted by training bodies designated by ICP-ANACOM, ensuring that knowledge is kept updated.  This designation process will be concluded on 15 May 2011. As such, ICP-ANACOM worked to ensure that conditions were in place to enable this training, working especially in conjunction with the ANQ - Agência Nacional para a Qualificação (National Qualifications Agency) and the DGERT - Direcção Geral do Emprego e Relações de Trabalho (General Directorate for Employment and Labour Relations), in order to determine the training requirements and contents. In addition, approval was given to the harmonized procedures for appointing training providers, as well as the applicable technical and human requirements 1.

Following this work, refresher training was undertaken and completed for all technicians registered with ICP-ANACOM. Under a protocol signed with the Ordem dos Engenheiros Técnicos (Association of Technical Engineers) on this matter, the training given to engineers continues to be updated; and training courses are being prepared to qualify technicians who want to become ITUR and ITED installers and designers.

ICP-ANACOM has been granted powers to enforce compliance with Decree-Law no. 192/2000 of 18 August, which establishes the regime governing the free circulation, placing on the market, and putting into service in Portuguese territory of radio equipment and telecommunications terminal equipment. This legal regime resulted from the transposition of Directive 1999/5/EC of the European Parliament and of the Council of 9 March on R&TTE equipment and covers various types of equipment, namely: (i) radio equipment using radio spectrum frequencies, containing a transmitter and/or a receiver 2; and (ii) telecommunications terminal equipment which, through an interface, is connected to the public telecommunications network (public GSM networks, analogue or digital telephone networks and data networks) 3.

As a result of these inspections and subsequent laboratory and technical documentation analysis, a total of 181 cases were referred to litigation as a result of detected non-conformities.

Finally, there is also the specific case of radio equipment using frequency bands whose use is not harmonized throughout the EU. The manufacturer, their importer or legal representative are now required to notify ICP-ANACOM four weeks before placing such equipment on the market, in accordance with article 9 of Decree-Law no. 192/2000 of 18 August. This notification is always reviewed by this Authority whereas failure to comply with ICP-ANACOM's directions with regard to these devices can lead to a restriction on their entry into service. In addition, the restrictions stipulated to those responsible for placing the equipment on the market must be reflected in the information provided to the equipment's users. In 2010, 1,146 notifications were made under article 9 and 6, paragraph 4 of Directive no. 99/5 (R&TTE), whereas 106 communications were found to be incorrect and responses/analyses were received to 27 notifications.

Related to the enforcement and investigation activities carried out by ICP-ANACOM, this authority has an important laboratory activity, supporting its oversight of the equipment market and actions to inspect the market and industry.

This laboratory activity has developed an increasing level of competence in recent years, some of which is unique in Portugal and must be preserved and which, since technology is changing fast, must be expanded, adapting to new technologies and new regulatory frameworks. This led, in December, to a reorganization of the three laboratories which existed at that time into a single testing and calibration laboratory (LEC), with different functions, but with sufficient flexibility of action so that it can give the best response to requests from different services.

The laboratory has a unique structure, based primarily on areas of an operational nature and mainly focused on the execution of "testing" and "calibration": (i) electromagnetic compatibility and radio tests; and (ii) calibration.

The main actions undertaken with regard to providing technical support with respect to the radio and telecommunications terminal equipment market and the work done in these three laboratories is outlined below.

During 2010, testing was carried out of radio and telecommunications terminal equipment covered by Decree-Law no. 192/2000 of 18 August for the purposes of market inspection and for the provision of technical opinions in the context of legal proceedings.

Market and industry inspections were also conducted, verifying the essential requirement for electromagnetic compatibility in electronic communications equipment covered by Decree-Law no. 325/2007 of 28 September, with technical opinions also issued in this area in the context of legal proceedings.

As a result of complaints related to the use of power line communication technology (PLC) technical verification of equipment involving that technology was performed in the laboratory and on-site.

Subsequent to an external request, expert opinion was given in respect of digital television equipment, in order to assess the attempted use of cardsharing.

In providing oversight of the radio equipment market (R&TTE), 167 radio devices were tested with different applications, 126 taking place in the context of market investigations, 33 referring to investigations into the use of radio spectrum and in the context of 8 expert opinions on radiocommunications equipment provided upon the request of judicial/police authorities.

Studies and tests were continued throughout the year, with an expansion of the number of characteristics which can be subjected to laboratory verification.

All technical and auxiliary procedures governing laboratory activities have been revised/updated with a view to their improvement and in view of the framework of a single laboratory system with flexible accreditation.

133 devices were tested during the year, including 97 for the purpose of market inspections in the context of R&TTE and 36 at the request of external agencies.

The accreditation awarded by IPAC - Instituto Português de Acreditação (Portuguese Institute of Accreditation) according to standard NP EN ISO/IEC 17025 for the execution of tests was maintained.

To implement the plan to calibrate ICP-ANACOM's equipment calibration, which is the responsibility of this laboratory, 218 pieces of laboratory equipment were calibrated during 2010, corresponding to an increase of 32 percent over 2009.

Meanwhile, 56 calibrations were performed for external clients, with the number of units calibrated declining 17.6 percent compared to 2009.

The accreditation awarded by IPAC - Instituto Português de Acreditação (Portuguese Institute of Accreditation) according to standard NP EN ISO/IEC 17025 for the execution of electrical and frequency calibrations was maintained.

ICP-ANACOM engaged in preventative and reactive enforcement actions with respect to its frequency management activity. The preventive component entails verification of compliance with the regulations associated with spectrum management, aiming:

Investigations carried out in this area led to around three quarters of the 111 cases which were referred to litigation, leading to the instigation of infringement proceedings.

The remaining cases that were referred to litigation originate from ICP-ANACOM's reactive activities, which always stem from external requests. On mainland Portugal, 1650 requests were dealt with in this context.

Of these, 494 related to interference and culminated with ICP-ANACOM issuing determinations with a view to the implementation of technical amendments to restore normal conditions, whereas the remaining requests (about 40 percent) involved direct inspections of radio stations and networks; in many cases were irregularities detected and the processes were referred to litigation.

The following table shows details of ICP-ANACOM's reactive activity, as developed on the mainland in 2010.

During 2010, ICP-ANACOM was called on to resolve 494 cases of interference, with 13 percent related to the aeronautical mobile service. ICP-ANACOM also resolved around fifty situations of interference affecting the networks of public MTS and mobile trunking operators. Such situations are particularly important due to their impact on the economic activity and life of ordinary citizens (given the high rate of penetration across Portuguese society).

ICP-ANACOM also conducted monitoring, on a regular basis, at entertainment, sports and/or official short-duration events, which is an activity that has significant bearing on the regulator's international image. This year, included the State visit to Portugal of His Holiness Pope Benedict XVI, and later in the year, the 2010 NATO Summit held in Lisbon. In addition to the main objective of ensuring that the communications of licensed users do not suffer interference problems (which significantly decreases ICP-ANACOM's reactive activity in this regard), this type of activity has resulted in a very significant increase in "temporary" licensing granted by ICP-ANACOM.

The monitoring and control of the spectrum area also received 1,464 requests related to non-ionizing radiation, calling for analysis of specific situations. 1,452 cases were concluded (involving analyses at 235 educational establishments), many of which involved on-site measurements.