On 7 April 2021, the Euro-Mediterranean Regulators Group (EMERG) held its plenary session. The session was held virtually and was chaired by João Cadete de Matos, representing ANACOM, which takes over the EMERG presidency in 2021. About 40 representatives of EMERG members participated in this meeting, together with representatives of DG Connect and DG Near from the European Commission, the Chair of BEREC in 2021, Michel Van Bellinghen (BIPT, Belgium); the President of the Eastern Partnership Electronic Communications Regulators Network (EaPeReg) in 2021, Nataliia Lado (NKRZI, Ukraine); and consultants from DETECON. The session was also attended by EKIP, National Regulatory Authority of Montenegro, as an observer.

This Plenary resulted in the approval of the work programme for the 2021-2022 period, which had been prepared by ANACOM and which, for the first time, spans two years of activity. In this context, new working groups (WG) were set up, in addition to the two existing groups (international roaming and open Internet):

The meeting also included presentation of the 2020 Benchmark Report, along with the 2020 Annual Report and its annexes. These documents will be subject to final comment and subsequent approval by electronic procedure.

As part of the agenda, the representatives of the European Commission gave a presentation on the European Union's new 2030 Digital Strategy, and there was presentation of the new Agenda for the Mediterranean. These two lines of action will be key in outlining future cooperation between EMERG and the European Union, with confirmation of Europe's commitment to the role played by EMERG, which already comprises 13 years of engagement to approximate and share best practices in the sector and in the Mediterranean region.

In terms of EMERG's international activities, the Chair of BEREC in 2021, Michel Van Bellinghen, recalled the recent Memorandum of Understanding (MoU) signed with EMERG: the renewal of the cooperation between the two organisations on the topics of common interest has always been considered a key priority by EMERG Members in the view of the approximation to the EU Regulatory framework. A joint workshop on regulation of digital platforms is planned under this MoU in 2021. As regards partnerships with similar groups, EMERG confirmed its willingness to strengthen cooperation with the EaPeReg group, considering the fruitful exchange of best practices between the two regional groups and promising future initiatives, especially in relation to international roaming.

Meanwhile, note was made of EMERG's other activities during 2020, especially the 2020 Global Symposium for Regulators and participation in the PRIDA project, which is an initiative supported by the European Commission and by the African Union to promote ICT on the African continent and to overcome the digital divide - work which the pandemic makes particularly important. 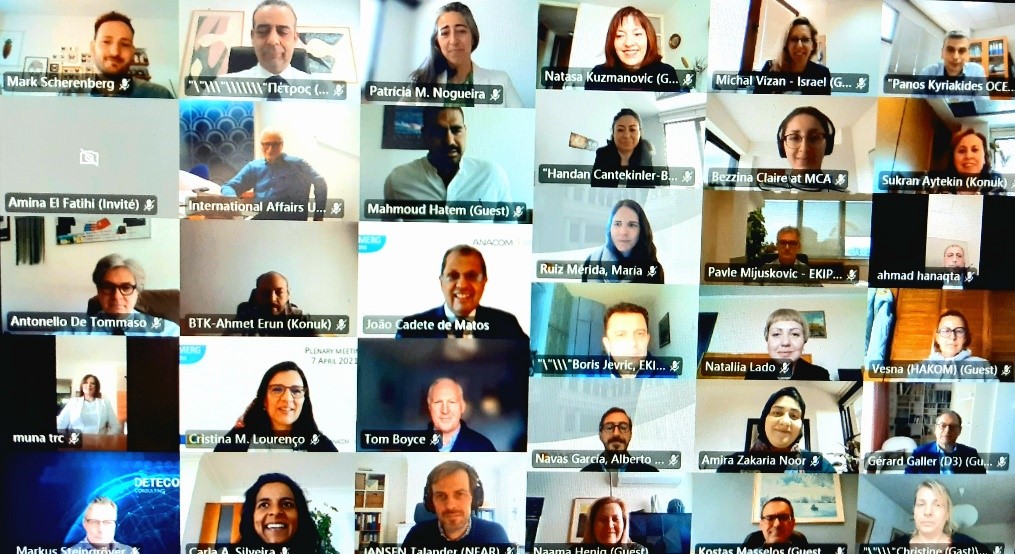 Participants in the plenary session